Everyday Racism: 84 years ago and today

As Edmund Burke once said: “The only thing necessary for the triumph of evil is for good men to do nothing.”  For the past 7 months in NJ, we have seen a lot of good people saying nothing — as hatred and animosity towards the (((others))) came to the fore.

When a Mahwah Council-member (he has since resigned) mocked a Holocaust survivor and pointed to the “money-trail”, the good people were silent.

Racism isn’t new and hating people because they are different will never go out of style.  But between the violent outbursts we learn about in civil rights battles, there was always an everyday racism.  It’s the story of average, everyday people.  People that didn’t seem to be expressing active hatred.  People that seemed to just want to continue going about their daily lives the way they always had been.

It’s the everyday attitude that lets hatred proliferate when it ceases to be the muffled noise, and moves to the streets.

Eighty-four years ago, silence by good and decent people in Europe let evil triumph, as people took to the streets to advocate the destruction of the Jewish eruv and threw stones through windows of the Jewish community president’s home.

I have seen similar comments of those who threaten to tear it down today.  Not in Europe, but here in New Jersey.

Perhaps, those that don’t learn from history ARE doomed to repeat it.  What lessons are you learning?

BUCHAREST, Feb. 13. — The combined efforts of all the members of the police force of Dej. Transylvania were required today to quiet disturbances which arose when the Christian population of the town protested against the execution of a Sabbath duty by the Jewish community of Dej.

Although the police of the town, which is predominantly Jewish succeeded in establishing order, excitement still continues in the atmosphere.

(According to Jewish custom, which prohibits the carrying of articles on the Sabbath, except in one’s own home, an “eyrev” — or wire surrounding a district where things may be carried — can be fixed to poles surrounding the district.)

As reported by JacksonLeaks.com, the Civil Rights Division of the US Department of Justice has launched its own investigation into Jackson’s municipal laws over possible violations of the Religious Land Use and Institutionalized Persons Act (RLUIPA) and the Fair Housing Act (FHA).

As was reported yesterday, the NJ State Attorney General’s office has also sent a subpoena to Jackson officials requesting documents related to their ban on eruvs within the township.

The DOJ’s request (embedded below) focuses on two ordinances (3-17 and 4-17) dealing with school and dormitory requests by a religious organization, after bans were put in place by Jackson officials.  It requests 10 years worth of zoning and planning documents to see if there is a pattern of targeting unwanted groups or part of a coherent strategy on zoning.

From the DOJ demand letter:

“Our investigation will also focus on whether the Township, by enacting these Ordinances, has engaged in discrimination on the basis of religion by effectively prohibiting any religious organization from establishing a school with religiously affiliated housing, including a yeshiva, in Jackson.”

END_OF_DOCUMENT_TOKEN_TO_BE_REPLACED

It was accidentally leaked last week that the State of NJ was looking into discriminatory ordinances passed in Jackson, NJ in order to prevent the erection of an eruv within in the Township.

Now, Jackson Leaks has obtained the subpoena issued to Jackson, NJ and you can read it below.

As we posted last week, a preliminary agreement was reached to permit the eruv.  We will continue to monitor and update the public regarding the situation.

UPDATE: This may not be a done deal just yet.  As per TLS:

There have been reports today in various media outlets claiming that the Orthodox community’s lawsuit against Jackson Township has been “settled” following the Township’s introduction of a resolution to allow Eruv placement on utility poles.

These reports are blatantly inaccurate.

“We are currently engaged in mediation with Jackson Township,” Rabbi Schnall told TLS. “While we are encouraged by the Township’s Resolution, no settlement has yet been reached. We are not at the end, and much more still needs to be worked out. We remain hopeful for a positive resolution.”

Jackson, NJ has entered into a settlement with Agudath Israel, a Jewish group attempting to create an Eruv over objections from the Township. The agenda lists Resolution 368R-17 as pending.  The Resolution (embedded below) calls to:

It goes on to note:

“That permission and authority are hereby granted for the placement of eruvim/lechis on poles erected by utilities that have the lawful right to maintain the poles within the public right-of-way in the Township of Jackson provided the utility company consents to such placement and there is compliance with all applicable Federal, State and Local laws regarding safety requirements related to the use of the public right-of-way.”

As per the Asbury Park Press:

“The resolution to be voted on by Jackson council members specifically notes “exorbitant amounts of legal fees” as a reason for the settlement.”

The settlement comes a few days after the Village of Pomona lost a costly Federal Court battle over zoning created to prohibit a Jewish group from building in the NY area situated a few miles from Mahwah, NJ where a similar court action is pending.

There is a closed session meeting in Mahwah, NJ to discuss litigation today, Tuesday December 12th. 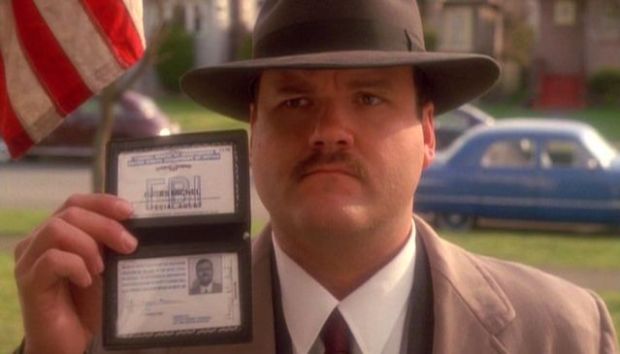 So what happens when Code Enforcement gets tired of spying?

A helpful reader has provided audio of a conversation where they were confronted at their front door by two Code Enforcement Officers over praying in their house, after being watched by them for weeks. Below are excerpts from this audio. It is worth noting that the two officers are professional throughout and the conversation is cordial, however we find the content disturbing.

Code Enforcement Head Ken Pieslak introduces himself, and tells the resident that prayer (shudder) has been reported in his house. Praying is somehow against the law, though Ken isn’t sure exactly which one; it has something to do with acreage and setback. From his description it’s almost certain he is referring to Jackson zoning code § 244-115, which sets the conditions for a building that is primarily an institutional church, including a 2 acre lot and 200 foot setbacks. Needless to say, this person’s house is primarily a private residence and thus not subject to these requirements.

Are you the owner? Okay.

We’re getting, we’ve received some complaints last week that on Friday, you’re conducting services in the house. And we don’t want to bother, we didn’t want to come Friday at sundown and bother you so we wanted to get a hold of you ahead of time, cause you may not be aware that we have a code that doesn’t allow it. It only allows it in certain zones and you need X amount of property and, be, 200 foot setbacks and so forth. And we can get you a copy of the code, I don’t have it on me right now, but we just wanted to make you aware that it isn’t allowed.

I mean, if you have something scheduled for tonight, we understand, we don’t wanna, it’s last minute, we’re okay with that. But anything in the future beyond that, you know, we’re going to have to give a notice of violation followed up by a summons and that sort of…

What was the actual complaint? Was it noise or parking violations that spurred this concerned citizen to action? Code Enforcement Officer Connie Sidor fills in the details: an anonymous tipster helpfully took a video of people praying in the house and reported it.

Connie Sidor: The complaint came in, and we have a video of, they say, 30 people going into the garage and holding some kind of service or something. So, the ordinance says you can’t hold, on a continuous basis, any type of church or religious service.

Forget about any useful legal advice (or lack thereof) the officers may have been operating with, doesn’t this fail a basic smell test? Does it really bear saying that people are allowed to worship in groups in the privacy of their homes? Substitute in another type of gathering and imagine the absurdity: getting a notice of violation for hosting a weekly Boy Scout troop meeting or a summons because you have invited friends over on successive Sundays to watch the Giants lose. Imagine the township showing up because someone sent them videos of you having dinner parties (“We have decided that you are a restaurant” says Ken). What country is this anyways that people record their neighbors praying and run off to report them?

Let’s be reasonable here, one cannot do whatever they want in the name of religion. In Sexton v. Bates for example, the construction of a mikvah (Jewish ritual bath) was disallowed in a residential area in NJ. But our state constitution ensures that the right to gather and pray cannot be abridged by municipal zoning.